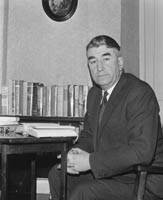 Bryan MacMahon or as he was more affectionately known in Listowel, The Master, as the ‘All-seein’ God’ bestowed a prolific literary talent on 29 September 1909 to the north Kerry town.

MacMahon was a folklorist, short story writer, poet, playwright and producer of plays, novelist, lecturer and ballad-maker. He also wrote pageants, radio features, and television scripts and plays. His first play The Bugle in the Blood was produced in the Abbey Theatre, Dublin, in March 1949. The Honey Spike was produced by the Abbey in 1961 and won major national and international awards. Song of the Anvil was again choice of the Abbey Theatre for the International Theatre Festival in 1960, using music composed by Seán Ó Riada.

In 1952 his novel, Children Of The Rainbow, was published in Britain, the United States and Canada. In 1970 he published also in the US a further book for children, Patsy-O and his Wonderful Pets. He also wrote Brendan of Ireland, a book of the life of a child in the Irish countryside. His autobiography, The Master was published in 1992. A novel, Hero Town was posthumously published in 2005.

Bryan MacMahon had a great love of the Irish language, of which he was a fluent speaker. He spent much of his time in the islands and Irish-speaking areas. His translation from Irish of Peig, the autobiography of Peig Sayers of the Great Blasket Island, has gone through several editions. It was serialised by Radio Éireann and attracted a large audience. He was one of the very few outsiders who could speak Shelta, the secret language of the Irish travelling people. His article on the lives of the Irish travellers, appeared in Natural History (New York) in 1971. It was later published in Merian (Germany), attracting world-wide attention from sociologists.

MacMahon was one of the founders of Listowel Drama Group in 1946 and its first producer. The Group won nationwide acclaim, producing some of the dramas written by Bryan himself.

One of the founders of Listowel Writers’ Week in 1970, MacMahon was the first to introduce the writers workshop to the Irish literary scene. It is now very widely accepted in Ireland. A life-long collector of native music, he initiated the popular Radio Éireann series, ‘The Balladmaker’s Saturday Night’. The programme helped to prepare the way for the revival of native balladry. MacMahon wrote the ballad, ‘The Town of Listowel’, about the Listowel Racing Festival.

His accolades include Kerryman of the Year 1987, American Ireland Fund Literary Award recipient 1993 and the award of the degree of LI.D from the National University of Ireland in recognition of his services of Irish literature. Bryan MacMahon died in February 1998.