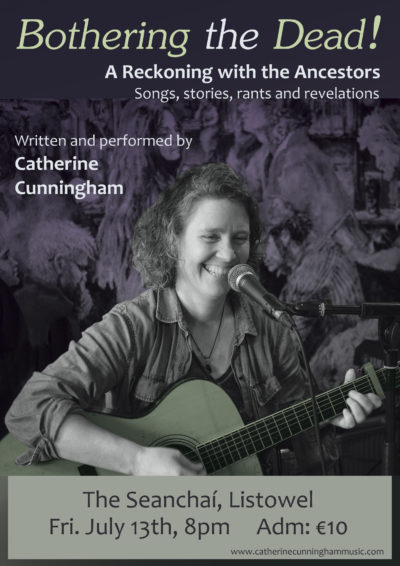 Bothering the Dead – A reckoning with the Ancestors will take place at Seanchaí – Kerry Writers’ Museum on Friday July 13th at 8pm.  This unique performance by Catherine Cunningham features Songs, Stories, Rants and Revelations, Visions and Transmissions!

When Catherine receives an unusual transmission from a tomato plant, she is forced to reconsider the legacy of being part of a good and decent Irish Catholic family.  She subsequently discovers a generations-deep conspiracy to banish the natural world from her seeing, and ultimately finds herself in a confrontation with her long-dead Granny – and the long line of women who came before her!  Catherine challenges these women to justify their loyalty and devotion to a religion of “warmongers, witch burners, ecociders and genociders . . . .all praying to the same God as me!”

After warning her “not to come around here bothering the dead”, her Granny and the Virgin Mary lure Catherine down through the pain of her cultural and family her story and then into her own personal psyche where she is shown how she too has made a bargain not to see – and how this has come at a far greater cost than she ever anticipated . . . .

Catherine Cunningham grew up near the village of Athea in West Limerick, where she developed her creative writing skills.  At different stages, she played tin whistle, accordion and piano. She obtained a degree in philosophy and moved to Boston, where one afternoon, the words of a subway poet inspired her to quit her office job and take to the subway busking.  In the time-honored tradition of the folk singer, she hitched around the U.S. and Canada, sharing music and stories.

After recording her first CD “Circles of Crazy” in 2000, Catherine returned to Ireland and now works on music and education projects. In 2013, she produced a second CD/Book – “Do You Remember Me?”, and she is currently in the process of recording her fourth album “Bothering the Dead”  (the third album “Stronger for the Flame” is due for release in 2019).