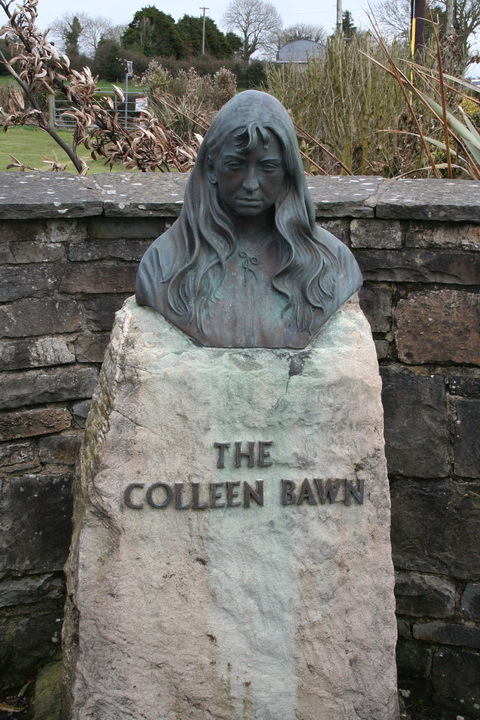 Join us on Sunday August 25th on the Colleen Bawn Tour to commemorate the 200th anniversary of this tragic event in our history. The tour will be led by local historian Patrick Lynch and we will cross the Shannon Estuary to the resting place of the Colleen Bawn in Killimer, Co. Clare. We will also visit Glin Castle and village in Co. Limerick.
Tickets – €20.00

In the Autumn of 1819, at Moneypoint, Kilrush, were found the remains of Ellen Hanley. The victim, now known to story, drama and opera as the Colleen Bawn, was not quite sixteen years of age. Her body was washed ashore there six weeks after her marriage. She had been murdered at the insistence of her
husband, John Scanlan, of Ballykehan House, near Bruff County Limerick.

Ellen Hanley is reputed to have been of outstanding beauty, and in addition, was of a bright and friendly disposition. Soon after she became acquainted with John Scanlan he proposed marriage to her. Scanlan, a young man in his twenties, belonged to the ascendancy and being anxious about the difference in their social position she was unwilling to marry him. However, he calmed her fears and the marriage was arranged. She eloped from the home of her uncle in early July, 1819.

Shortly afterwards, Scanlan tired of his young bride, and with his servant, Stephan Sullivan, her murder was planned. Using Scanlans boat Sullivan took her for a trip on the river. Armed with a gun, he lost his nerve just as he was about to commit the awful deed. He returned with Ellen to Glin. Scanlan plied Sullivan with more whiskey and convinced Ellen to resume the boat trip. In mid-stream Sullivan murdered her with a musket. He removed her garments and ring which he kept in the boat. She was tied with a rope which was attached to a stone and the remains were dumped in the Shannon. Six weeks later the body was washed ashore at Moneypoint. This appalling crime created feelings of horror and pity among all classes.