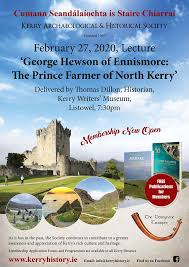 February’s history lecture at Kerry Writers’ Museum is entitled ‘George Hewson of Ennismore – The Prince Farmer of North Kerry’ and will be delivered by Listowel historian Thomas Dillon.

In the 1870s the estate of George Hewson, of Ennismore, Listowel, amounted to over 400 acres in County Kerry as well as over 1200 acres in county Cork. He was also the proprietor of over 650 acres, Catherine Hewson of over 800 acres and Rev. Robert Hewson of over 500 acres, held on long lease in county Kerry. In the 1830s, the Ordnance Survey Name Books record that James Hewson, of Killarney, was acting as agent for the Bland estate in the parish of Caher, barony of Iveragh.

Ennismore House, just outside Listowel was leased by George Hewson from the Earl of Listowel’s estate at the time of Griffith’s Valuation, when it was valued at £22. In 1814 Leet refers to it as the residence of F. Hewson while Lewis, in 1837 notes that Ennismore, the seat of J.F. Hewson, gave its name to a title held by the Hare family, Earls of Listowel and Barons Ennismore. In 1906 it was part of the Listowel estate and valued at £26 10. Bary writes that this property was originally in the possession of the Knight of Kerry but was bought by the Hare family, Earls of Listowel in the 1790s. The Hewson family lived here up until the 1920s but the house is now demolished.

In this monthly history lecture Thomas Dillon will explore the fascinating life of one of North Kerry’s great landlords.

The lecture is organised by Kerry Archealogical & Historical Society
and takes place on Thursday February 27th at 7.30 pm. Admission is free to Society members and non-members must be accompanied by a member of KAHS.