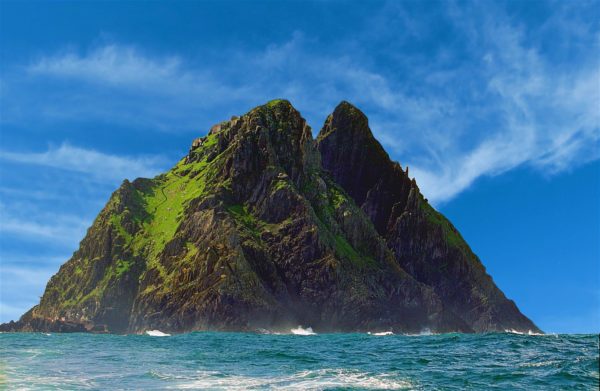 Skellig Michael – Kerry’s Ancient Wonder is the topic for our March history lecture by John Sheehan, Department of Archaeology, UCC. In this lecture John will explore the history and archaeology of this famous UNESCO World Heritage Site. But to wet your appetite here are some facts and figures about Skellig Michael.

Skellig Michael (Sceilg Mhichíl) or Great Skellig (Sceilig Mhór) is a twin-pinnacled crag 11.6 kilometres (7.2 mi) west of the Iveragh Peninsula in County Kerry. The island is named after the archangel Michael, while “Skellig” is derived from the Irish language word sceilig, meaning a splinter of stone. Its twin island, Little Skellig (Sceilig Bheag), is smaller and inaccessible. The two islands rose c. 374–360 million years ago during a period of mountain formation. Later, they were separated from the mainland by rising water levels.

Did you know that Skellig Michael consists of approximately 22 hectares (54 acres) of rock. Its highest point, known as the Spit, is 218 m (714 ft) above sea level. The island is defined by its twin peaks and intervening valley (known as Christ’s Saddle), which make its landscape steep and inhospitable. It is best known for its Gaelic monastery, founded between the 6th and 8th centuries. It is also home to variety of inhabiting wildlife. For example gannets, puffins, a colony of razorbills, and a population of approximately fifty grey seals.

You will learn why the island is of especial interest to archaeologists, as the monastic settlement is in unusually good condition. The rock contains the remains of a tower house, a megalithic stone row and a cross-inscribed slab known as the Wailing Woman. The monastery is situated at an elevation of 170 to 180 m (550 to 600 ft), Christ’s Saddle at 129 m (422 ft), and the flagstaff area at 37 m (120 ft) above sea level.