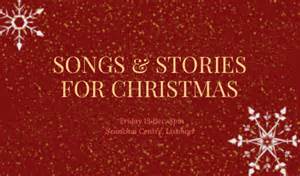 Songs and Stories Christmas features two of North Kerry’s most accomplished artists in an evening of seasonal classics. Mezzo-soprano Leanne Fitzgerald and poet Gabriel Fitzmaurice will feature in this special concert on Friday December 13th at 8 pm. You can come along and enjoy Christmas music, carols, poems and stories to celebrate the festive season at Kerry Writers’ Museum. Participating musicians include pianist Michael Young and harpist Eithne Walsh.

Songs & Stories for Christmas will be followed by wine and cheese reception.

Leanne Fitzgerald, a native of Lixnaw, recently graduated with a Bachelor of Music honours degree from the DIT Conservatory of Music and Drama. In 2012/13, Leanne was selected for a choral internship with Chamber Choir Ireland. She joined Irish a cappella vocal ensemble Ardú in 2015. She has since performed with the group at the Cork International Choral Festival, City of Derry International Choral Festival, Tampere Vocal Festival, Finland and the Edinburgh Fringe Festival. As part of her work with Ardú, Leanne helped found and develop Ireland’s A Cappella Competition and the first ever Irish International A Cappella Festival. (www.irishacappella.com)

Deeply rooted in the literary tradition of North Kerry, Gabriel Fitzmaurice is a poet, broadcaster, writer, translator, singer and raconteur. He was born in 1952, in the village of Moyvane, Co Kerry where he still lives.