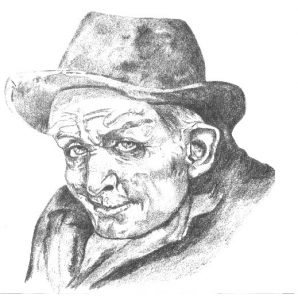 George Fitzmaurice was born in 1877 in the family home, Bedford House, just outside Listowel on the Ballylongford road. With his father’s death in 1891, the family was forced to move to a farmhouse in Kilcara, outside the village of Duagh. The circumstances surrounding the family meant none of its members was ever quite considered of the landed class, and neither did they fit in as locals.

Local stories tell of ‘Master George’ being seen composing his plays in the woods, in the parlour of his home, as well as in a large 15 acre top field on their farm. George was inspired by the colourful characters he met, as well as the people’s stumbling attempts, at the end of the 19th Century, to speak English instead of Irish. He moved to Dublin where he was employed by the Civil Service. His earliest writings were published in Dublin weeklies between 1900 and 1907.

He first major success came in 1907 with an Abbey Theatre production of his comedy The Country Dressmaker. One of Fitzmaurice’s most notorious characters, Luke Quilter, the man from the mountains, appears in this play that proved hugely popular with audiences, much to the surprise of one W.B. Yeats.

His second play, a dramatic fantasy entitled The Pie Dish, was totally rejected by critics and considered blasphemous. It lead to the rejection of what is now understood as one of his best plays, another dramatic fantasy, The Dandy Dolls. Ironically, the Abbey Theatre produced this play in 1969, six years after his death.

Other well-known plays by Fitzmaurice include The Magic Glasses, The Moonlighter, The Enchanted Land and One Evening Gleam. A selection of short stories The Crows of Mephistopheles was published in 1970 by the Dolmen Press.

George fought in World War One. He spent his later years following monotonous routines in Dublin, with a fear of travelling and people. An unsent letter in his belongings, found after his death, revealed that he had suffered from neurasthenia, which explains his shyness.

To view a 1965 interview of John B. Keane speaking about George Fitzmaurice, from the RTE archives, click here.

To listen to the 1972 RTE Radio 1 Documentary entitled ‘Wicked Old Children of George Fitzmaurice’, from the RTE archives, click here.