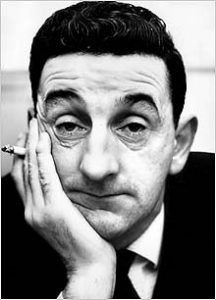 John B. Keane, dramatist, novelist, poet and raconteur, was born on 21 July 1928 in Listowel, where he resided with his wife Mary over their much-frequented public house, until his death.

John B. Keane has contributed greatly to both local and national theatrical life. His first play, Sive, presented by the Listowel Drama Group, won the All-Ireland Amateur Drama Festival in 1959, and its enormous impact immediately made Keane’s reputation. Sive is concerned with the traditional theme of the made marriage. It was followed in 1960 by Sharon’s Grave, one of the author’s favourite plays.

His next plays turned away somewhat from the folk past of North Kerry and depicted some of the elements of change in rural Ireland at that time. Many Young Men of Twenty (1961), is a musical about emigration and portrays the lack of jobs and opportunities which forced the people of Keane’s small town to depart for the modern world of England.

Other plays penned by Keane include The Man from Clare (1962), Hut 42 (1962), The Year of the Hiker (1963), but a stronger plot and characterisation make The Field (1965) one of Keane’s best plays. This play was subsequently adapted for screen by Noel Pearson and Jim Sheridan in 1996.

Big Maggie (1969) dealt with a familiar Irish phenomenon, that of the domineering mother, and provided material for an actress to play a strong formidable central character on stage. Moll (1971) is another woman’s play, the main character being a canny and domineering housekeeper of the local parish priest. Next came The Crazy Wall (1974), The Buds of Ballybunion (1976), and The Chastitute (1979).

Keane’s imagination and humour are unique and surreal – as anyone who has had the privilege of hearing him speak well testify. His wit and talent are also evidenced in his many journalistic compositions, some of which have been collected in volumes of short, chatty essays.

John B. Keane died in May 2002, during his beloved Listowel Writers’ Week, of which he was a co-founder. When asked how he would like to be remembered in the 1994 RTE ‘River of Words’ documentary he replied – “as a player who scored the winning point in the Finals of the North Kerry Intermediate Football Final against Duagh in 1959”.