Kerry Writers’ Museum in conjunction with Listowel and District Historical Society, presents a series of history lectures throughout the year.  Each lecture focuses on a particular aspect of local history or commemorates significant anniversaries in Irish and international history.

THE DAYS OF THE BLACKTHORN: FACTION FIGHTERS OF KERRY 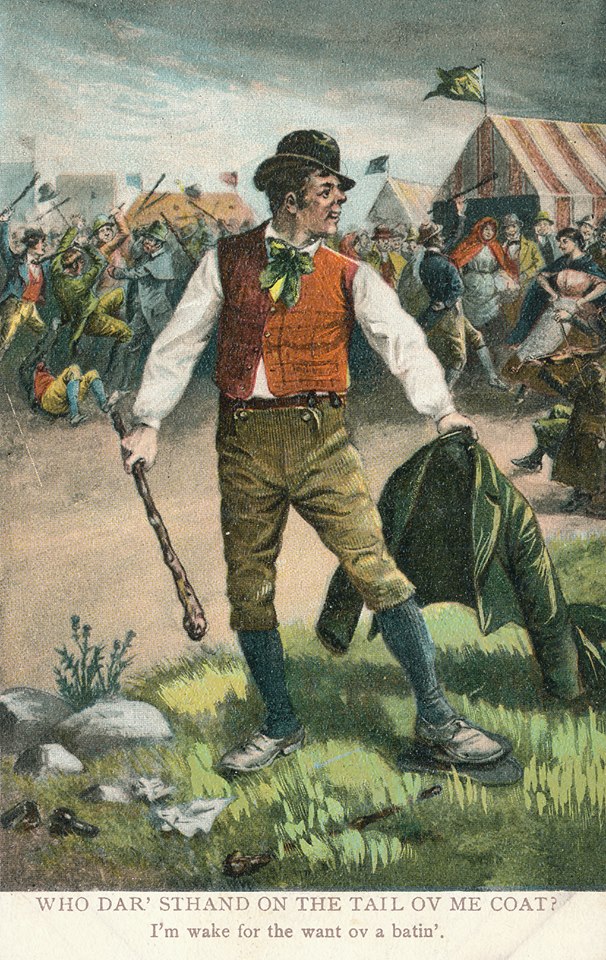 On town streets or in green fields, at fairs, race meetings and saints’ patron days, rival gangs of Irishmen used to meet to battle and beat each other with cudgels and sticks. The practice was particularly prevalent in the 1800s, and involved tens, hundreds and even thousands of men and women at a time.

Based on his book ‘Days of the Blackthorn’ published earlier this year Seán Moraghan uses eyewitness descriptions, as well as the oral history of local communities, to provide a visceral sense of this exciting and brutal activity in County Kerry. From the Battle of Ballyeagh near Ballybunion between the Cooleens and the Lawlors that left eighteen dead, to the savage combats of various strongmen, such as Seón Burns or ‘Big Mick’ Foley, the lecture is a fascinating account of a wild and violent time in Ireland’s history.

Some of the history lectures we have hosted in the past few years include:

While many of the women who were in leadership positions in Cumann na mBan or the Citizen army during the Irish revolutionary period are already well known, there were hundreds if not thousands of other women – working class women, rural women, ordinary members of Cumann na mBan, whose contribution to the War of Independence, 1919-1921, was vital but often hidden. They were the intelligence gatherers, they were the spies and message carriers, they ran safe houses and took care of arms dumps, they transported arms and bomb making equipment to ambushes, they collected and buried the war dead, they were the essential backbone of the military operations. They were also the ones most in danger from the Crown Forces as they could not, usually, go on the run.

One of those women was a North Kerry woman, Amelia Wilmot (nee Canty), daughter of a blacksmith, born in 1874, in Lyracrompane, near Listowel, who was the subject of this lecture by Dr. Mary McAuliffe. Mary explored Amelia’s activism in the Irish War of Independence and her afterlife in the Irish Free State.

Moonlighting, or the activities of agrarian secret societies, was the subject of this presentation, specifically a Moonlight outrage that was perpetrated in late 1881 at Scrahan, in the parish of Duagh, near Listowel. The incident, which occurred when George Fitzmaurice was a child and involved his father, resulted in the lengthy imprisonment of seven local men and may have inspired or influenced The Moonlighter, Fitzmaurice’s realistic drama that was published in 1914.
Hosted in conjunction with Listowel Writers’ Week

Sinn Féin Food Committee vs. the Earl of Listowel by Kay Caball.

In 1917, with shortages and rising food prices due to the First World War, Listowel Urban Council requested the Earl of Listowel to ‘make two large fields, known as ‘the two lawns’ available for cultivation available to the poor people of the town. Following a series of unproductive letters between the Council and Lord Listowel to no avail, the Sinn Féin Food Committee was established with a view to acquiring the land for tillage. Getting tired of waiting for permission, the Food Committee, with the help of volunteers from Moyvane, Knockanure, Finuge, Rathea, Ballyconry and Ballylongford, ploughed up the ‘front and back lawns’ on 25th February 1918. The members of the Committee were jailed for a month on May 23rd. Kay recounted in detail these events in her lecture.

German airmen who crashed in Ireland during the Second World War and survived were interned here, becoming objects of great curiosity among local people who encountered them.  People living in the southern coastal counties from Kerry to Wexford, had frequent reminders of the Second World War with warplanes making forced landings, or bodies being washed up on our shores. Based on his book Luftwaffe – Eagles Over Ireland, Justin told the story of those German airmen and will focus in particular on those that crashed in Kerry.

It is through Cumann na mBan that many Irish women sought a political platform, post 1916, and the organisation grew nationally, including, more locally, in Kerry. In 1918, with the limited female franchise now law, the nationalist Cumann na mBan women and the militant Irish Women’s Franchise League came together to campaign for the imprisoned 1916 rebel Countess Markievicz and other Sinn Féin candidates. Mary’s lecture considered the importance of women’s political activism and the women’s vote to the Sinn Féin victory in the 1918 Election. Women canvassed, campaigned and voted for Sinn Féin in large numbers. Mary’s also explored what women did in County Kerry in 1918.