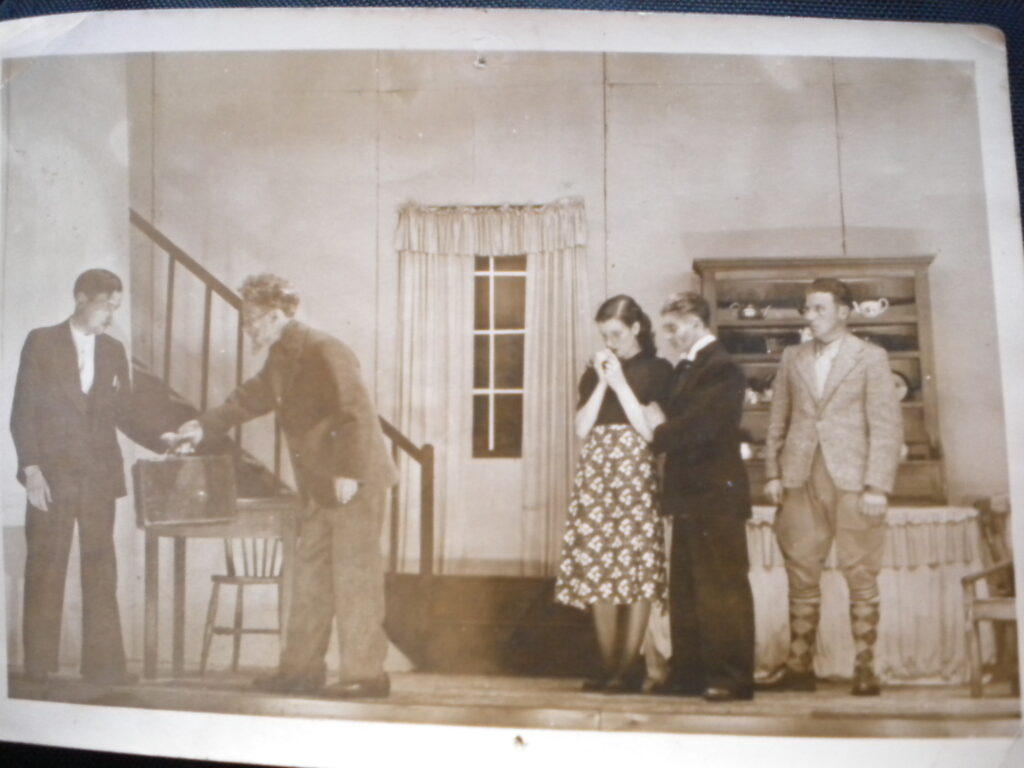 Seumas de Faoite, who used different variations of his name when writing; i.e., James White, Seumas White, Reardon White), was born in Killarney in 1915. On leaving St. Brendan’s College he worked in various jobs including a position as a postman for a time. An acclaimed short story writer, his work was published in various periodicals from 1941 onwards. However, his first love was the theatre. Initially, he joined the Killarney Dramatic Society, which was founded in 1929 and was one of the original founding members of the Killarney Players in 1939. In 1943, he co-founded the Hibernian Players, alongside Josephine Albericci, a formidable director and founder of the Kerry Drama Festival.

de Faoite’s stage appearances included Lennox Robinson’s The Far Off and The New Gossoon by George Shiels; plays that were particularly popular on the amateur circuit at the time. His wife, Eileen Fogarty, a Killarney native, starred alongside him in a number of productions. Encouraged by an increasing interest in playwriting during this period of amateur dramatic renewal, he began writing plays. His first plays, staged locally were Love Wore a Wild Rose (1942) and subsequently, The Crake in the Meadow in 1943, which received much praise in the local press.

In 1945 his new play, The Cardinal and the Crows, won the New Manuscript Section at the Kerry Drama Festival. It was highly praised by Michael Farrell, a well-known theatre critic at the time. The play centres on an IRA veteran nicknamed the ‘Cardinal’ who sells missals in a Kerry village. His neighbours are known as the ‘Crows’. He shares a house with three other bachelors, including a war veteran and two builders. Women are banned from the house butwhen one of the men falls in love and duly brings his fiancée to live in the house as a lodger, much delight ensues with the ‘Crows’. Despite the previous ban on women, the four bachelors eventually join forces and stand up to the gossipers. The play was later adapted and televised in the United States by NBC as The Baron and the Banshees.

de Faoite began spending periods of time in Dublin acting with the Players’ Theatre before eventually settling there with his young family. There, his great friend Josephine Albericci, who had taken a position at the Abbey School of Acting in 1946, produced a number of his plays, including a revival of The Cardinal and the Crows at the Gaiety Theatre in 1947. That same year he was offered a two-year scholarship to Fordham University to study drama. However, with a young family to support, he was unable to take up the offer. He supplemented his acting career with journalistic work, which eventually became his full time occupation, and he worked as film critic with the Irish Press until his untimely death in 1980.

de Faoite was a great friend of Bryan MacMahon’s, among others, and their plays, both thematically and aesthetically, have much in common. For the most part, although he wrote a considerable number of plays for both stage and radio, few of the play texts have survived, or, at least, have been located to date. It is proof positive of his determination to succeed, by his offering playscripts to anyone at all interested during a post-war period when paper was scarce and few copies of scripts could be made.

His persistence was unending it seems and two scripts have been located in the United States. de Faoite wrote considerably for radio during the 1940s and 50s and copies of a number of these plays survive. The RTE Radio Scripts’ Collection (P261) at the UCD Archives provides some details on these plays. However, due to copyright reasons, it is not possible to archive any copies in the Kerry Writers’ Museum Archive. Other reference points are the radio listings in archival newspapers. Importantly, a translation of one of his plays into irish was later staged by the Abbey Theatre.

KWM Amateur Archive holds two copies of his ambitious play, The Night of the Moon, one of which is belonged to the late Bill Kearney. (see Bill Kearney Collection:(KWM.2016.0013). In some ways it might be seem as a pre-cursor to Bryan MacMahon’s The Honey Spike. Based on the trials and tribulations of a traveller group, the play dramatises the clash between the traveller community’s authentic, older culture and contemporaneous changes at the time of writing in the 1940s. The play’s action revolves around a group on its way to the town of Arnakill, (a derivative of ‘Cill Áirne’, the Irish for ‘Killarney’) when a new by-law restricts travellers from setting up camp, even temporarily, or settling in a house. The play is set in a time of increasing negativity towards travellers, which is dramatised by a love triangle. The 18-year-old Breed, who dreams of settling in a new house, is being wooed by two men: one of which is prepared to forego the life of a traveller to marry her. The situation is complicated by Breed’s stormy relationship with the second man, the free-spirited Rollaway. As a result, Breed is torn between the old and new cultures. Themes of loss are heightened by the compelling story of two other tinker women: Mane, who has been driven mad by her search for her drowned son, and Anne who is pregnant and dies in childbirth while her child survives.

In the play, de Faoite bravely instills elements of stage design and lighting that were quite new to the playwriting scene and hint at the work of the likes of Galway’s M.J. Molloy, whose work was extremely popular on the amateur circuit. Some ten years or more before John B. Keane took up the mantle with Sive, de Faoite was attempting to dramatise a somewhat controversial agenda.

Following his death, he was described by the national press as ‘a pioneer of the amateur movement’ and by Míchéal O hAodha as ‘a fine Kerry writer’. Critically, de Faoite’s involvement in the amateur movement helps to identify the importance of the movement and the competitive circuit.

Thanks to the tireless work and research of the late Frank O’Carroll, a stalwart supporter of de Faoite’s work, the posthumous collection of de Faoite’s short stories, Death of a King and other Stories, was published by Lilliput Press in 2005.

Back to Kerry Amateur